You Know You Are Loved When... 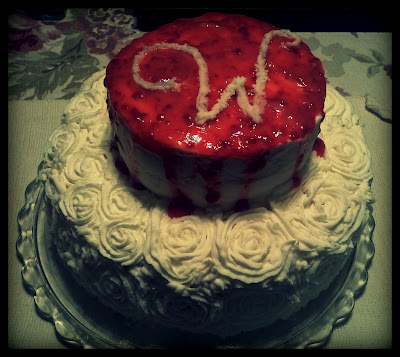 J's brother & his fiance were in town this weekend, so we threw them a bridal shower. When my newlywed cousin (who is also J's brother's wife, think about it,) suggested we make the same cake I made for her shower, I took a deep breath and nodded my head, warning her that it would be quite a project. We did take some shortcuts this time - like using cake mix. Good decision!! If you are dying to spend a whole day in the kitchen, I made you a list of what is in it. I won't bore you with all of the steps, I'm sure you can figure out most of them.


2 Boxes Duncan Hines Vanilla Cake with Vanilla Pudding mixed in, of course!
Simple Syrup with Lemon juice to coat the layers right after they come out of the oven
Homemade Buttercream Icing
Lemon-Raspberry Curd for the filling between the bottom two layers and the topping. I used the lemon curd from this recipe, and just added raspberries after it cooled.

I saw the rose thing here first. It's super-easy, but slightly time consuming. She explains the technique really well, but I used a different tip than she did. I don't even know what it is called, but it looks like a 5-point star.

My cousin and I worked long and hard on this, so it was great to see that it was a huge hit at the shower. Even for "non-cake people." It looked great, but tasted even better!