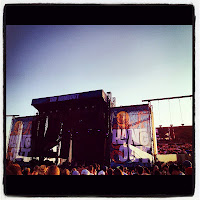 Last May, I swore off the Hangout Music Festival forever. It was hot, crowded, smelly and more loaded than a Colombian drug cartel.

Then they announced the 2012 line-up and we were lured back to the beach with 35,000 of our closest friends.

First off, the organizers did a great job of listening to the requests of the festival-goers and the locals. There was more room, better (& less trippy) bands; and the the vendors included local favorites like Burris Farm Market, L.A. Barbeque and GooRoo's Grill.

Secondly, the music was incredible. My favorite shows included: The Givers, The Lumineers, Gary Clark, Jr., and, yes, Dave Matthews Band (with Tim Reynolds!!!) Don't hate, guys, the man has still got it. J would probably add Jack White to the list. Unfortunately, due to a blown heater hose on my Honda, I missed our inner-state faves, Alabama Shakes. Hopefully they'll stop by after their European tour!

All in all... what a great weekend! What bands would you like to see at Hangout 2013?